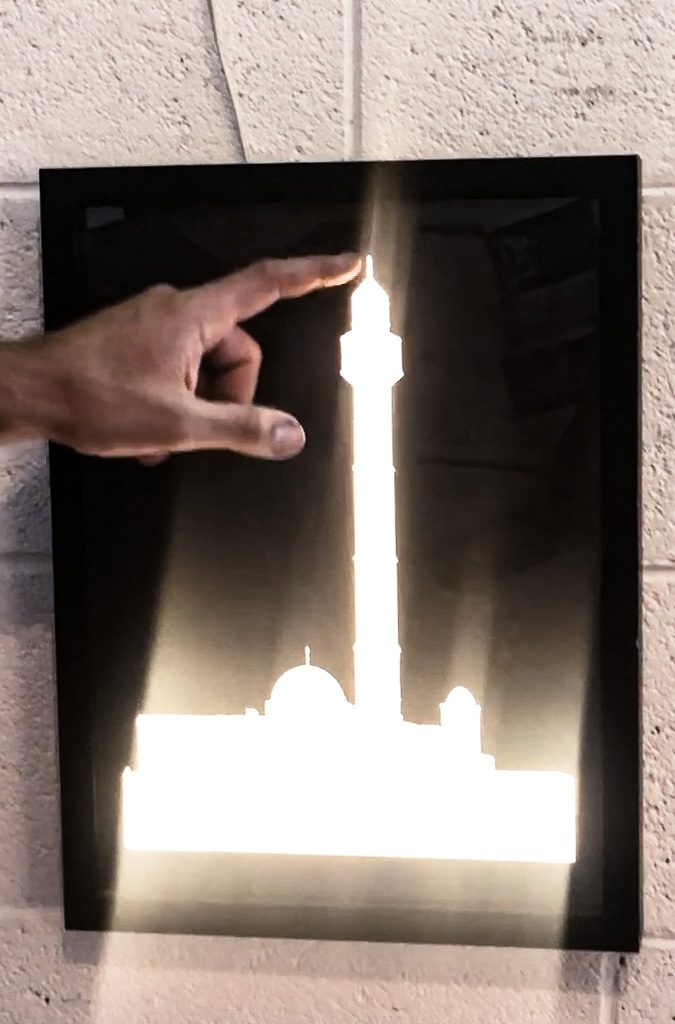 Last month I went on a trip to Israel and stayed in a very interesting area of what has now become part of the urban tapestry of the city of tel Aviv called Jaffa also know as Yafo. Jaffa is actually one of the oldest ports of the world and is home to a heterogeneous population of Jews, Christians, and Muslims.

The area is also home to many artists who have founded studio spaces in the run down areas away from Jaffa centre. It  is here in an old building which once housed a brothel which has been turned into studios for creative people that I met Nir Adoni an artist who depicts architectural imagery with metal cut outs, light boxes and mixed materials which possess an intrinsic stark visual language and an extrinsic powerful narrative moulded by the volatile environment of the Middle East. 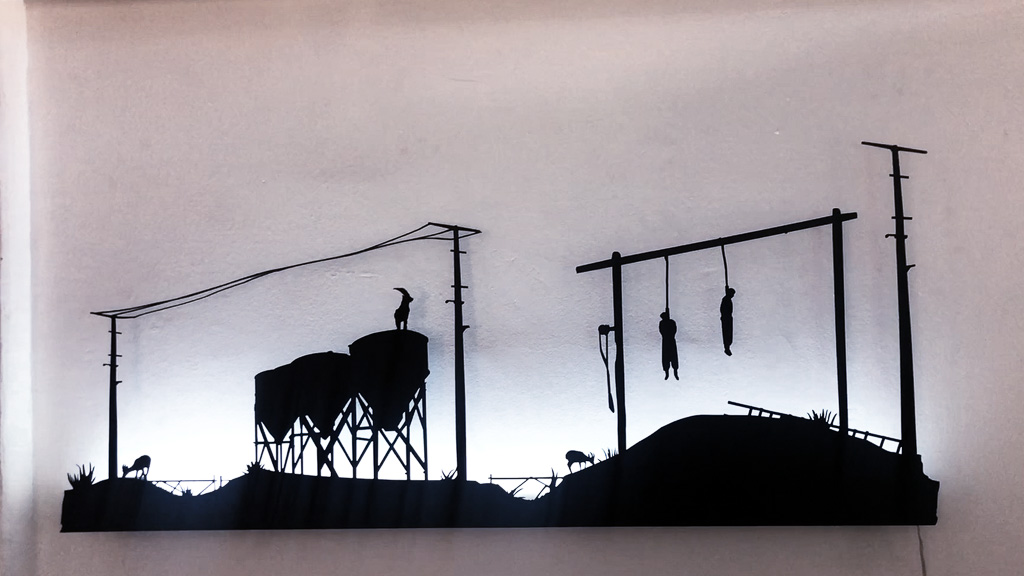 As I walk around his studio admiring his work I casually ask him some questions about the pieces on display. Here is  my interview with Nir.

Pier: What are your earliest kinds of work?

Nir picks up a sculptural piece of work and sits it on the studio work-table.

Nir: This is kinda of my technique, to take parts, I take parts of things… This is what I do. I take different parts of architecture and then I put my own history into it.

I take pieces of architecture from my own surroundings. It’s really important for me to actually explore the architecture that I live in. The minarets and then mosques in Tel Aviv and in Yafo where the first. It was a starting place for me to understand how I look at the city, because the Hassan Bek Mosque is quite a famous mosque that was built in 1930. This is part of it. Nir shows me another piece of work on the wall.

They erase the image of the mosque but, I was actually interested in this because the story of this mosque…

Because… the story is that Hassan Bek, didn’t want Tel Aviv to grow because Tel Aviv was a new city which started in the 1920. He had this mosque built because he wanted to say: this is Tel Aviv this is Yafo, Yafo was an Arab city so he said Tel Aviv will not grow beyond this point, this line or border.

So the minaret is quite tall, it’s like quite a big penis at the end of Tel Aviv! (laughing…)

I started to think about this because when I was growing up my father who worked on the same street as the mosque so, I remember that when I was about 5 years old we were driving in the car and I was always looking at this minaret. It was abandoned during the 70s and 80s…

By the way, this is the sketch of the mosque so you strip it of all the 3 dimensional parts and then you look at the visual it’s gorgeous, it’s amazing you know so, I couldn’t understand how people could ignore it.

Pier: How do Israelis react to your type of work?

Pier: Yes but is your work controversial?

Nir: I think collectors and buyers are not willing to buy any work that has any suggestion of Islam. They try to ignore it but, exhibitions and curators of course they are interested.

By the way I am trying to make these from silicon so they will not stand. Think about all the power that loose, you loose everything. He points to more work on the wall. 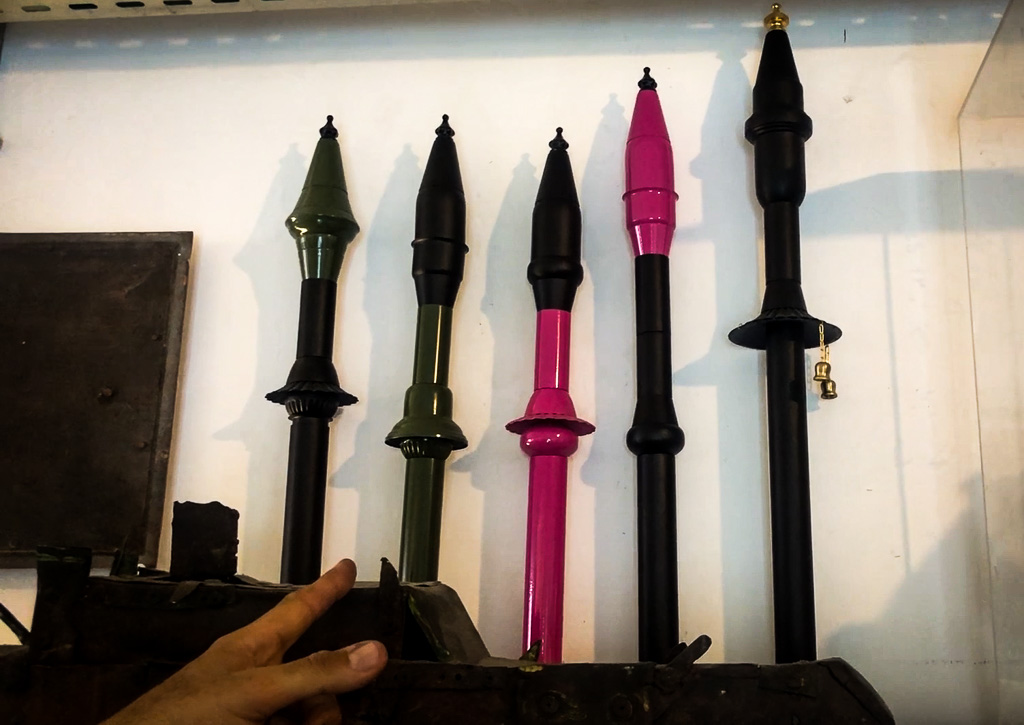 Pier: Could you just explain again that this is part of work?

Nir goes and fetches another piece of work I was looking at earlier that looks like a kind of rocket. 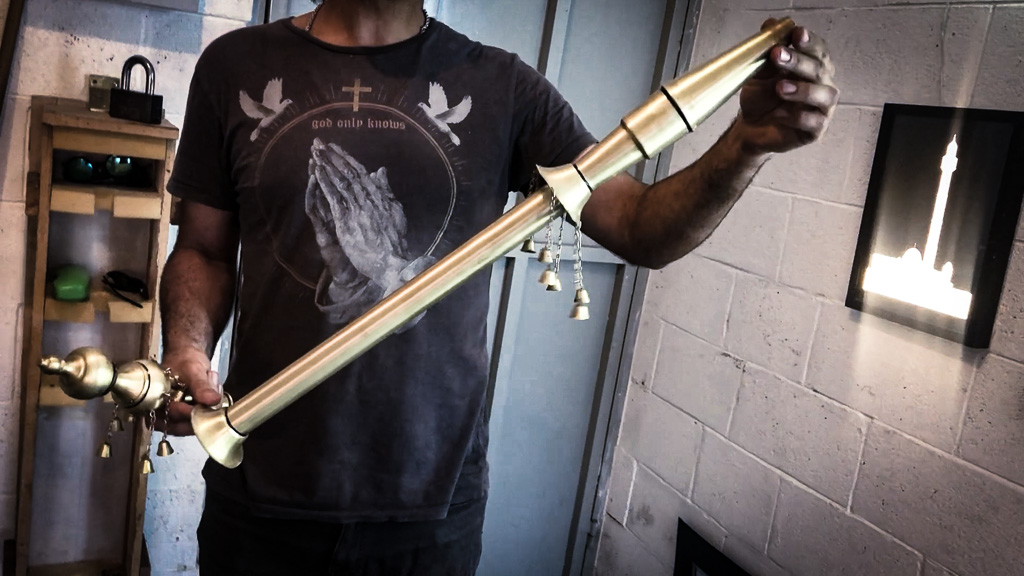 Nir: I was trying to make a model. This is NOT  real, it’s hollow inside. I tried to make it as real as possible. It’s an RPG (The RPG-7 (Russian: РПГ-7) is a portable, reusable, unguided, shoulder-launched, anti-tank rocket-propelled grenade launcher.) built in Russia in the 60s it’s still in use and these at the end are pomegranates that you put on the Torah.

I brought old stories from my grandmother, she grew up to next to Mosul ahem… of course it is a city, it’s a country that I cannot go to really…

Pier: But you told me about the fantasy between what is real and what is not real and the way you’ve incorporated that in work… I am interested in how you’ve mixed elements of reality with your perception of a country that you have never visited.